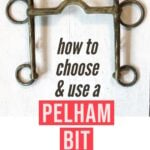 A Pelham bit is a horse bit that functions as both a snaffle bit or a curb bit, depending on how it is used.

A Pelham bit is essentially a plain dressage-legal snaffle bit, but with a second rein connected to the bit at the end of a short shank. This shank, which creates curb action, makes this bit illegal for dressage competition.

Despite this, the Pelham bit has some application in training horses, in training riders to handle two sets of reins, and as a “Snaffle bit with an emergency brake” that can be primarily used via the snaffle rein, with the curb rein used when extra control is required. A pelham bit can be useful when judiciously used in non-competition settings.

At high-energy events such as parades, breed demos, or even warm-up rings, it can be helpful to have the snaffle rein for primary use and the second curb-connected rein just in case a sharper correction is needed in order to control the horse and keep rider and onlookers safe.

Riding with a Pelham Bit

A Pelham bit is often viewed as a harsh bit, but when used with double reins, the Pelham is actually a very humane bit. When you are riding with a Pelham, contact should be taken on the snaffle rein, and the curb rein should be left just a bit slack (not so loose that it flaps, but loose enough that it doesn’t hold tension between the rider’s hands and the bit).

A rider correctly using a Pelham takes gentle contact with the top (snaffle) rein while allowing the bottom (curb) rein to remain slightly loose, as shown.

Recommendation: Use reins made for use with double brides:

Standard reins have the same hand-feel to each other when doubled up- this makes them harder to manage. Special reins cut specifically for use as the curb set of reins when using double reins have a narrower cut. This thin rein makes it easier to handle double reins. Through tactile cues, you’ll learn how each rein feels between your fingers and how to control them independently.

Using Pelham Converters to Riding with One Rein:

Pelham bits are sometimes fitted with converters or “roundings” which allow a rider to use a single rein with a pelham bit.

In this writer’s opinion, converters are not appropriate for any horse or rider, because they turn a sophisticated bit into a bit that is consistently sharp and painful for the horse.

A pelham bit converter means that every movement of a rider’s hand applies painful curb pressure to a horse’s mouth. That’s rarely necessary! If a horse does need that amount of control all times, a Kimberwick bit is a more appropriate choice for an English rider.

Alternative to Pelham Converters: Riding with One Set of Reins

Using a pelham bit doesn’t require that you choose between double reins or a converter. There is a third option: Removing the rein from the bottom ring (the one farthest from the horse’s mouth) and riding only with the rein attached to the top ring effectively turns a pelham bit into a straight-mouth snaffle bit.

If a horse is safe to ride with just a snaffle bit, then riding with a single-rein pelham can work as a temporary solution (such as letting a new rider hop on for a few minutes to ride a horse for the first time)

History and Modern Use of Pelham Bits

Pelham bits have been around since the medieval age. 1 The Pelham bit has been popular with show jumpers for some time but is increasing in popularity as a bit for schooling dressage.

The benefit to schooling dressage in a pelham bit is that the horse can be collected on the snaffle rein, but the shoulders can be lifted and collection improved with judicious use of the curb rein.

Transitioning From Pelham to a Double Bridle

For the rider who hopes to transition to competitive dressage levels where a double bridle is required, a pelham bit can be a less-complicated way to accustom yourself to holding and handling two sets of reins.

IMPORTANT: Pelham bits are generally not allowed in dressage competitions. However, In some organizations, a pelham bit is allowed in upper levels, but only on ponies who lack sufficient space in their mouth for a double bridle.

Alternative Use for Pelham Bits: Decorating

Pelham bits have a surprisingly aesthetic form that lends well to equestrian decor. I have a post on how to decorate with old horse bits. After cleaning horse bits, you can make simple metal wall hangings using fishing lines and tacks.

Research sources used for this article: