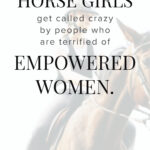 If you’ve spent time in Internet comment sections or discussion forums in the past decade, you may have picked up on an internet-birthed trend in which women with equestrian hobbies are referred to in derogatory, demeaning, or at times flatly cruel terms. Somehow, it not only became acceptable to not only associate equestrians with being “crazy,” but a derogatory name developed as well: “horse girls”

What’s in a name: Horse Girls

“Horse girl” may seem like a harmless phrase, but let’s look at it a little closer. When people (typically men, but at times other women as well) use the term horse girl, they achieve several things:

Women are not girls, and when the term “girls” is used to refer to adult women or adolescent young women, it’s often used in a way that undermines the innate strength of a woman’s femininity. Often, men who are intimidated by women who consciously or subconsciously wish to lessen the value of women’s athletics refer to women using this language. 1

“First of all, it’s sexist as hell. If a man likes to fish and goes fishing every weekend, he’s a fisherman. If a guy enjoys deer and goes hunting all the time, he’s a hunter. If a dude is obsessed with video games and spends all his free time making YouTube videos on how to 100% the game, he’s a gamer. But when have you ever heard a woman who likes horses and rides horses being called an equestrian? No, we’re “horse girls.” And we’re “crazy.”” – reddit user.

2. Dehumanizing a Group of Women

Think for a moment about similar terms. Imagine “Dog Boy” or “Bird Man.” Are the images that come to mind when you hear those terms images of humans with interests and passions? Or do they call to mind something that is less than human? My guess is, the latter is true- which is exactly what is intended by those who perpetuate the phrase “horse girls” as a way to refer to women who are interested in hobbies involving horses.

“I’m a male rider, why am I not labeled as overly emotional, spoiled, and psychotic? Why specify the judgment only toward women? Maybe it’s because most of these opinions come from heterosexual men who use an ex-lover’s passion for equestrian as an excuse for them to bash an individual they shared a relationship with.” – reddit user.

Why Hating “Horse Girls” is Easy

In a culture still largely dominated by the forces of patriarchy, men’s work, men’s hobbies, and men’s sports are generally all seen as more legitimate than those of women. Sadly, we are practically primed to laugh along at cruel jokes about horse girls unless we pause to consider power dynamics and how equestrian sports create stronger, more confident women who pose a threat to patriarchal systems.

The truth is, the femininity of women is threatening – both to men who value power and control, and to women who shy away from the power of their own authentic self-expression, and passions. When women grow stronger through equestrian sport, grow more intuitive through this connection with nature, and grow more confident through finding a place in a hobby that isn’t dictated by fashion, beauty, or romance, they become more of a threat to the status quo. 2

“Girls and women lose touch with their own needs and wants and become dependent on fulfilling the needs and wants of others. Meeting the needs of others becomes a gauge for self-worth […] Defenses are lowered and risk is heightened as women lose touch with their innate system for sensing people and situations that are safe or unsafe. A woman’s experience with horses can help her to reconnect to the body as a guide to self-realization.” 3

Adolescent women who prefer the company of a horse or a few equestrian pals compared to consuming makeup tutorials, filming TikToks, or obsessing over fashion are nonconformists. And even in schools, communities, and groups that identify as tolerant, many will readily devalue, dehumanize, or attack the mental health of “horse girls” simply because these women are not what they are expected to be.

Why Horse Girls get Called Crazy

Claims that horse girls are “crazy,” simply don’t hold up. In fact, literally countless studies in Equine Assisted Therapy have shown that even with little or no intervention on the part of a human therapist, horses help regulate emotions, improve self esteem, boost body image, and improve the symptoms of many mental health disorders 4 5 6

“I personally think it’s rooted in some cultural misogyny that doesn’t really know what to do with girls who really, really love something that isn’t focused on some of the traditional ultra-feminine values like caring for others or the performance of feminine behavior like princesses and barbie dolls. A little girl who loves horses is no less common than a little girl who loves dolls and babies or who wants to be a nurse or a teacher or a mother, but the latter all reinforce American cultural ideas of what womanhood is.” – reddit user

It’s no wonder, then, if through equestrian sports, women and girls become more empowered, intuitive, and confident, and all of those things threaten the power structures present in modern society, that “crazy” was adopted as a tactic to devalue these women and discourage other women from following in their footsteps.

The ostracization of people who don’t maintain the status quo through conformity and who refuse to play the role assigned to them isn’t new. People like this have been labeled as “crazy”- or worse, “possessed” -throughout human history.

The rejection of the “horse girl,” can be seen as a sister crime to our ancestor’s attack upon the “witches” of New England and the feminine power they represented. Just like the Salem Witch Trials of the 1600s, patriarchy has succeeded in turning culture-conforming women against the “horse girl.”

“Women are embracing the raw power and strength of horses as well as their gentle need to connect and rely on inner systems of awareness.” 7

While today’s victims of the punishment of nonconformity may survive only a bit bruised by the bullying, a clear signal is sent to those who might follow in their footsets: disconnect, conform, and affirm the patriarchal role of women as pretty, quiet, helper-mates tagging along in narratives that centers the male experience. Sadly, like the witch trials, this is an effective tactic to discourage women from stepping out of line to seek experiences of intuitive, power-affirming emotional and physical experiences in nature, like horse hobbies.

Now that you understand how the status quo needs women interested in horses to be unreliable and unlikable, it may be no surprise to hear that, actually, researchers have found that equestrians tend to have more resiliency and coping skills than women in other sports 8

“I was always bullied for liking horses. The boys would make crude jokes about killing my horse with their shotgun and how I probably committed [sexual acts]. But did anyone make fun of the autistic boy who wouldn’t stop talking about robots? Of course not. He was “scientific,” and “imaginative.” They definitely didn’t call me an athlete, and that’s the “horse girl” stigma.” – reddit user

Kids become fascinated with horses for a number of reasons in addition to the ones listed in this article. For more resources for parents, see our article on Parenting Horse Crazy Kids or or Guide to Starting Riding Lessons.

Why I Fiercely Defend Women, Girls, & Adolescents Interested in Horses

In my day job as a mental health professional, I see a lot of women and girls who are adrift, distressed by the pressure to live up to what family, friends, classmates, coworkers, partners, and culture at large expect from them. For many, this pressure is crushing, and too often draws them away from the things that give them life (and, sometimes, even from the things that make them feel like their life is worth living.) In both my own work and in countless studies conducted by psychology researchers, horses – and an interest in horses – are a stabilizing factor for the mental health of women and girls.

“For some women, the horse provides a nurturing and supportive relationship that teaches her how to embrace and recover parts of herself that facilitate a sense of well-being and develop self-worth.” 7

Hagström (2000) has shown that bonding with a horse can help children to make friends and adapt socially more easily. 9

Lena Forsberg spent 200 hours studying girls heavily involved in horseback riding in Sweden, conducting a type of ethnological research with qualitative research methods. She found that these horse-interested girls reported that when they were around horses, they felt the freedom to not curate their appearance. With one stating, “The stable is the only place where I do not need to care about how I look.”

Forsberg observed, “They developed a physical and mental strength through working in the stable, which is opposite to stereotype female traits. The girls oriented themselves toward ideals like being self-reliant, goal-directed, and autonomous.” 10

Research sources used for this article: