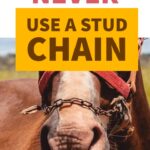 A stud chain can be a useful tool or an unnecessarily harsh correction, depending on the handler’s use of the chain and a particular horse’s sensitivity to correction. While a horse’s sensitivity can sometimes work to your benefit (like the horse who only needs a rider to carry a crop in order to become more responsive to its rider’s aids), once a horse has been correctly acquainted with a stud chain, many horses will stop challenging behavior in the future as soon as a stud chain is clipped onto their halter. But that doesn’t mean a halter chain should be our first response when a horse is charging ahead or not submitting to its handler on the ground.

Read on to learn about stud chain do’s and don’t, the 4 things you should NEVER do with a stud chain, and some tips for using one well.

One alternative to a stud chain that can be particularly helpful to try-  especially if you are hesitant about using a stud chain– is a lunging cavesson. The lunging cavesson must be a stabilized type with a ring at the center of the top of the noseband.

Similar to how dog harnesses with the clip at the very front of a dog’s chest have become a popular way to prevent pulling by destabilizing the animal when it pulls, a lead clipped to a cavesson will turn the neck of a barging horse in on itself, making it challenging for them to charge ahead.

Leading your horse with the lead attached securely to a non-twist prone headgear like a lunging halter (aka cavesson) which is specifically designed to stay centered even when twist-pressure is placed on the headstall. By clipping your line to the front of the horse’s nose, any charging forward will redirect much of the horse’s energy in the opposite direction.

Another alternative to using a stud chain is to use a rope halter. Once popular only among Western riders practicing natural horsemanship, today rope halters can be found in most barns. Rope halters provide a slightly sharper correction than the gentle strap of a wide halter. If your horse needs just a bit of a reminder when they are being led, a rope halter might be a good option.

A third alternative to using a stud chain is to use a regular halter, but instead of attaching your lead rope to the ring at the bottom of the halter, insert your lead rope through the halter square on the near side of your horse, pass it over the nose, feed under and around the lower portion of the noseband, and clipped the lead to the halter square on the opposite side of your horse or the O ring under the horse’s lip. When rope halters are used in training a weanling or yearling horse, often young horses learn a high level of respect for the halter and will never require the use of a stud chain.

By attaching a lead rope in this way, you can create a softer version of a  stud chain, with the softer correction offered by the flexible lead rope material rather than a hard chain.

In the past, at large breed demonstrations with our horses, it wasn’t unusual to find ourselves walking through a large crowd where bystanders had little-to-no knowledge of how to behave around horses. Walking horses through those crowds was always a little bit anxiety-producing for me, and nerve-racking for my horses.

Because I had been trained in how to use a stud chain well and my horses had learned, back home in low-stress, safe training areas, how to respect a stud chain, we often use a stud chain in these environments as an insurance policy to help ensure obedience when obedience is required for safety. In these cases, a stud chain help to add a layer of protection for the handler, horses, and bystanders at these large events.

When using a stud chain, these three rules should always always, always apply:

While even the sharpest intentional correction, with a stud chain, from humans, is unlikely to physically harm a horse, one risk of using a stud chain is the risk that the horse may break free of its handler, bolt forward, and step on its lead rope. If this happens, the chain can strike the horse’s nose with the full force of the horse’s body weight – offering the slightest risk of a devastating injury from the stud chain. For this reason, it’s especially important to introduce your horse to a stud chain in a safe, controlled environment with professional supervision.

Introducing your Horse to a Stud Chain

Before you begin using a stud chain, ask a trusted horse trainer or riding instructor for a lesson on how to attach and use a stud chain. Stud chains aren’t right for every horse and they are an easy tool to misuse, but when used properly they are a humane method for adding a bit of an “insurance policy” to a typical halter and lead.

One side effect of an improperly used stud chain is accidentally training a horse to back off from the correction so strongly that they rear up, which can be a far more dangerous behavior than charging ahead. You’ll need to know your horse well, and apply a firm but not too strong correction at the right time. If you’re not comfortable, ask a professional trainer to give your horse a 5-minute introduction to a stud chain. By learning hands-on with your horse, hopefully, you won’t even need to use the chain for correction at all.

Horses have a great memory and learning capacity. Because of this, if properly introduced, many horses immediately submit to a stud chain. In the future, horses may begin walking obediently as soon as the stud chain is placed on their halter.  (If improperly introduced, however, that same capacity for memory can make the stud chain a symbol of trauma. This can cause more- and more dangerous- problem behavior)

Should a Stud Chain Go Over the nose or under the lip?

Although it is popular, and even “correct” in some show circles to use a stud chain under the horse’s lip, there’s little evidence that this is an effective tool for increasing control of a horse. In fact, the stud chain under the lip can cause a horse to react upward by throwing its head up or even rearing.

In contrast, a correctly attached stud chain over the nose provides a barrier over the horse’s nose that prevents the horse from barging ahead dangerously or rearing. (Though do note that if used aggressively or improperly any horse may become frustrated enough to do either of these things– and other very dangerous behaviors– to escape pain)

When using a Stud Chain should there be tension in the line or should it be loose?

When using a stud chain you should never hold tension against the chain. Instead, just like using a choke chain on a dog properly, the chain should be “popped”  only when appropriate. If used with constant pressure the horse will grow numb to the pain and even lean into it. If the chain is “popped” only when specific behavior warrants that immediate response then a stud chain should be self-correcting and allow for the horse to walk on a loose lead.

If used properly, you should never have to be aggressive with a stud chain. Instead, just providing the introduction and then using the chain properly is usually enough to add extra control without any extra actual discipline for the horse. A stud chain is a psychological tool – the weight that the horse feels on their nose reminds them that there are consequences for dangerous behavior, and as a consequence, many horses won’t even try.

How to Tie a Horse

Never EVER  tie a horse up with a stud chain still attached to the lead. Instead, when you are ready to tie your horse, disconnect the stud chain. Change the snap of the lead rope so that the snap attaches to an O-ring on the horse’s halter.

You may leave the chain on the halter while tied as long as the chain can’t be engaged if the horse pulls back. If the horse pulls back, the pressure should be entirely transferred to the smooth, flat halter material. If you do not plan to immediately begin walking your horse again, remove the stud chain completely before tying to be safe.

When to Introduce a Stud Chain

As a final note in this article on appropriate stud chain use, remember to introduce your horse to any new disciplinary tool when the horse is not acting up.

If your horse is acting up already – and especially if they are reacting out of fear – it’s not the time to use a stud chain for the first time. Instead, introduce new tools like a stud chain when you and your horse are both relaxed.

While a stud chain can be a useful tool to manage a horse that is acting up, it’s best used only after the horse has learned what the stud chain is, when the stud chain corrects, and what behavior the horse needs to do to avoid the correction. You may also be interested in learning how to calm down an anxious horse.