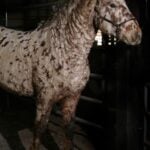 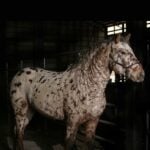 As the names in his pedigree imply, this horse was from the Mead line of curly horses. Also in Spot of Rust’s lineage age MCH Ernie* ABC 2246, White Dove ABC S-203, and foundation curly horses The Yellow Hornet* ABC 878(f) and “Old Grey Mare” ABC 719(f).

If you think your horse might be curly, check out our guide to how to recognize a curly horse, or read more about curly horses.

The history of Appaloosa curly horses

The curly horse originated with the American Mustangs, and American Mustangs contain the genetics for a huge variance in coloring. Because of this, there have likely been leopard Appaloosa curly horses for many generations – perhaps even going back hundreds of years.

this curly horse stallion had a gentle, docile temperament. Unlike many stallions, Rusty was never difficult to handle. He was, however resistant to training under saddle. Initially, we were hesitant to offer Rusty at stud for this reason, however, multiple trainers reported there were strong indications that Rusty’s response to having a writer mounted was due to trauma rather than a physical issue or behavioral problem. In fact, this stallion was extremely trainable – and was easily broken to drive a cart and to ground drive. Although Rusty was never comfortable with a rider, when he was sold to a Native American-owned organization offering immersive equine experiences, we knew it was a good fit for our leopard Appaloosa curly stallion.

Curly horses are an extremely versatile horse breed, though not yet very popular. The breed is still very rare – and Appaloosa-colored curly horses are even rarer. If you are lucky enough to own an Appaloosa curly horse you have the rare experience of having a horse with both spots and curly hair. Although, due to the combination of these genes, growing a thick mane and tail may be a challenge. You’ll need to provide high-quality feed for your curly spotted horse, and likely supplement with biotin or other additives that help improve the quality of manes and tails. Many Appaloosa owners choose to roach their horse’s mane, although Rusty’s mane grew in fairly full and thick.