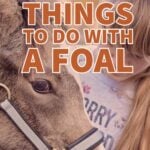 Raising a horse from newborn foal to your next riding partner can be an immensely rewarding experience. Many horse owners enjoy the opportunity to know their horse from the very first moments of its life. Breeding a beloved mare can be a way to preserve great genetics and have the opportunity to handle, train, and print, and bond with your next pleasure, performance, or trail horse from day one.

For many people who choose to raise a foal, the first few years can be a little bit boring. Since horses cannot be trained to be ridden until they are at least two years old, there can be a lot of waiting involved in the process. In this article, part of a series on things to do with young horses, we’ll discuss ten things to do with a foal. These activities can help you train, bond with your foal, and have fun together.

How soon can you start doing things with a foal?

As long as your mare tolerates your handling of her foal, you can begin working with your foal immediately after birth. While imprinting (a method in which humans interacted immediately when a foal was born, in a belief that it would result in more docile, trainable horses) was once very popular, Equine Veterinary research has shown no benefits to imprinting, and current best practices generally favor allowing a mare some privacy to bond with her foal, and only monitoring and minimal handling for the first few hours.

After the foal is standing and nursing successfully with a doting mother’s attention, you can begin having small brief interactions with your new foal. While your foal is a newborn, called a suckling because it is still suckling it’s mothers milk, there are plenty of things to do with a foal.

How to work with a Foal:

When working with a foal that still is unweaned from his mother, you’ll need to work with the mare nearby. Tying the mare in the corner of a stall or placing her on the other side of a divider (if she’ll tolerate the distance) are good ways to work with your foal that arent too stressful for mare or foal, while keeping interference from the mare to a minimum.

Keep your interactions with your foal brief. Very young horses don’t have much of an attention span or tolerance for extended training sessions.

1. Use gentle touch to teach your foal to enjoy human contact

One of the best things you can do for your foal while it is a newborn foal is to gently touch your horse all over its body. Soft, kind touch on your horse’s body, face, legs, and hooves can help acclimate a young horse to humans and prepare them for a lifetime of gentle handling.

Over days and weeks, as your horse becomes more and more accustomed to touch, began introducing them to tack and equipment: Getting a foal used to soft ropes touching, or even draped over their body is a great method for early training.

Instinctually, without training, horses push back against pressure. Evolutionarily this was helpful, since if a horse was attacked or trapped their only response was to flee. For domesticated horses however, both the fight and flight responses can be very dangerous.

For example, if a horse begins pulling back while tied up they could get serious injuries, fleeing from a horse trailer can cause dangerous accidents, and refusing to yield to a rider’s cues can seriously delay horse training. To help prevent all of these things from being an issue when your young horse grows into an adult, one thing you can do with your foal while they are still very small is to cradle your foal.

Only do this activity when you are sure that your horse is small enough that you can physically restrain them, and only after your foal has already learned to relax and submit to your touch. Without startling them or being overly aggressive, squat and place one arm in front of the foals just chest, and the other arm behind the foal’s rump, over the hocks. Don’t squeeze, but hold the foal in place. The foal is likely to struggle – that’s okay – it’s natural. Continue to gently restrain the foal until the horse stops – or takes a break from – trying to escape. As soon as the foal relaxes, remove your arms, free the horse, and give positive verbal praise.

Horses that are exposed to this kind of pressure response training as foals learn to believe that humans are physically stronger than them – which can make training in every life stage easier and less stressful. These horses are also less likely to struggle and physically injure themselves if, years later, they become caught in fencing or tangled up in bad footing on a trail ride.

Repeat this process many times when your horse is very young, but stop as your horse grows. Ideally, you should never give your foal the opportunity to best you at this game, so stop this training as your foal gets larger and stronger.

3. Teach your foal to yield to pressure

Once your foal is tolerating, without fighting, your attempts to cradle them, a good thing to do is to move on to teaching your foal to yield to pressure.

Yielding to pressure refers to moving their body away from pressure- important training that is much easier to do while your horse is still small enough to physically move with your body.

Long before foals are ready to begin “real training” they can begin learning positive associations that will shape their behavior and their response to handling later in life. One activity to do with foals that can result in easier care throughout their life is teaching your foal to tolerate being dewormed.

Most horses hate the taste of dewormer, will attempt to spit it out, and even toss their head or behave dangerously to avoid it. One easy way to minimize this is to, empty a tube of dewormer, clean it, and refill it with applesauce or another tasty liquid treat. Your foal can learn in just a few 60-second sessions that the deworming tool can be a tasty treat.

5. Teach your foal to wear a halter

Training adult – or even weanling – horses to wear a halter can be a headache, but it’s easy with foals. When working with a young foal, one of the best things you can do is teach them to tolerate wearing a horse halter when they are young. Very tiny halters (we stocked as small as pony–suckling size when I owned a tack store) help them grow comfortable with the feel of something on their face.

Pro-tip for foal parents: invest in a tiny leather halter. Not only are they adorable and safer than the nylon equivalent, but newborn foal size halters also make charming keepsakes. Framed in a shadowbox- with your first blue ribbon someday added – small leather halters make lovely display pieces.

6. Teach your foal to walk forward and halt on a lead

Once your foal is tolerating wearing a halter, being touched, and yielding to pressure, you are ready to halter train your foal. Often, this is easiest done by simply clipping a lead to the halter your foal has already been trained to wear and walking the foal along behind the mare while someone else leads her. Many young horses learn to walk forward and halt on a lead with no stress and no drama with this method.

While still at their mother’s side, you can begin grooming your foal regularly. Most foals don’t particularly require detailed grooming, but grooming a foal is a good thing to do for several reasons:

8. Teach your foal horse to load in a horse trailer

Generally, as horse owners and breeders, we aren’t inclined to load up a mare and her foal and take them to an event or other location- healthy mares and foals generally stay on the farm. However, loading and trailering – or even just loading and unloading – a mare with her foal still at her side can be low stress way to teach a foal the horse trailer is safe, and loading can be easy.

Spare yourself the grief of trying to load an unruly two-year-old horse that’s never loaded in a trailer by loading your mare and foal on several occasions before weaning your foal, and at least once every 3-6 months after weaning.

Social learning is the process of learning by watching someone- or something- else perform a task. Humans, dogs, and many animals develop through social learning and researchers have established this is also a way that horses learn (both from other horses and even from humans). In fact, researchers found that foals who encounter new objects in the company of a mother for whom the object is not new have fewer and less powerful fear responses.

9. Teach your foal to tolerate being tied

Foals have a very short attention span, so while tying the foal for long periods is generally not recommended, after your foal is submitting to pressure you can begin practice tying your foal.

When you first began tying your foal, tie the rope high (this makes pulling back less effective and less dangerous) with a dynamic knot (that can be untied instantly) and stand close by. Your foal is likely to struggle at first and then submit. When your foal stops pulling back and rests, reward them with gentle touch, kind words, and untie the rope. Over time, you can make these training sessions in tying last for longer periods.

10. Teach Your Foal to Pick up their Hooves

Tolerating hooves being picked up, cleaned, and eventually trimmed or shod with horseshoes is part of basic manners for an adult horse. Start acclimating your young horse to this practice by handling their feet during short training sessions. Your foal can learn to pick up a hoof in response to a hand running down their leg and pressing on their fetlock before they’ve ever even been weaned!

Raising a foal is richly rewarding. Whether your foal is newborn or a weanling approaching the yearling year, the tips above can be a fun way to bond with your foal and prepare them for a lifetime of low-stress training and handling.

Pin it now to find it later!

Although it can be difficult to resist the urge to rush training with foals, it’s important to remember that the first months and years of a foal’s life should be filled with growing, exploring, learning from its mother, and socializing with both people and other horses. If it’s hard for you to slow down the pace of working with your foal, consider reading about additional bonding-promoting activities you can do with a horse when you can’t ride, or dive into my recommended reading list of books about horses so you can invest your energy in learning more about how to raise a foal.

Rider by day, blogger by night, I'm Tatum, the face behind CurlyFarm.com. As someone who learned to ride in my 20's, I began blogging to help other new riders learn about riding and horse care! Since those first riding lessons, I've become a coach, breeder, and tack store owner. Join me as we ride through the adventure of horse ownership!