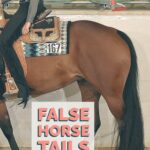 Fake Tails- are they Really “a thing”?

Horse shows have always been something of a beauty pageant for both horses and riders, but in the late 20th century it became increasingly common to improve the length and fullness of a horse’s tail by using what’s referred to as a “false tail” or “tail extension.”

Ok, so what is a fake tail?

The phrase “fake tail” is a bit of a misnomer: no one is chopping off and replacing the horse’s tail with an artificial tail, but what this practice does entail is the equine equivalent of hair extensions. And the hair extensions, though they don’t belong naturally to the horse, aren’t exactly fake.

Since synthetic hair hasn’t yet been able to convincingly mimic horse tail hair, fake tails are created, glued, or stitched together using the tail hair from horses who have been slaughtered for meat in countries where that is a common practice. These tails have become a strange, but not uncommon, export to the USA.

Do I need a fake tail to take my horse to a show?

Definitely not! Tail extensions are only allowed in some types of horse shows, and only (arguably) needed at the higher levels of those types of shows.

Shows where false horse tails are common (but never required)

Shows where false horse tails are not needed or required

Horses that should never be shown in Fake Horse Tails:

In some breeds, such as quarter horse and paint horse, nearly every horse will exhibit at a breed-association organized show with a fake tail extension, while other breed associations, including Arabian, Andalusian, Bashkir Curly Horses, Friesian, Lusitano, and Morgan breed registries forbid fake tails in competition. The governing bodies for these breed associations have explicitly forbidden false tails and will disqualify a rider if they are caught exhibiting a horse with a tail extension.

Just as how in dog shows each dog breed is judged against their own breed “standard,” instead of being judged directly against other dogs – the same type of judging is supposed to exist in all-breed or “open” horse shows. Because of this, even if you enter a Western pleasure class in which every rider is mounted on stock horses with false tails, if you are riding a horse of a breed where false tails are forbidden, your lack of a false tail should not be held against you or your horse.

Although technically true, not every judge is aware of this rule, knowledgeable about the particular standards for every breed, or able to recognize a unique breed of horse at first glance. Occasionally, it may be appropriate to inform or even educate a horse show judge about your horse’s breed.

Horse tail extension shopping is one area where it doesn’t pay off to be cheap. A horse tail that doesn’t color-match your own horse’s tail, is low-quality, or is not fit well can do more harm than good in the show ring.

Advice for getting a great-looking tail extension:

Though there can be a lot of pressure in some show circles to invest many hundreds in a premium false tail, the truth is that performance, practice, conditioning, and care wins horse shows, not false horse tail extensions. False tails are very likely a trend that will pass in the coming years, but good grooming, turnout, and conditioning- which anyone can afford- will always be on-trend in the horse show world.